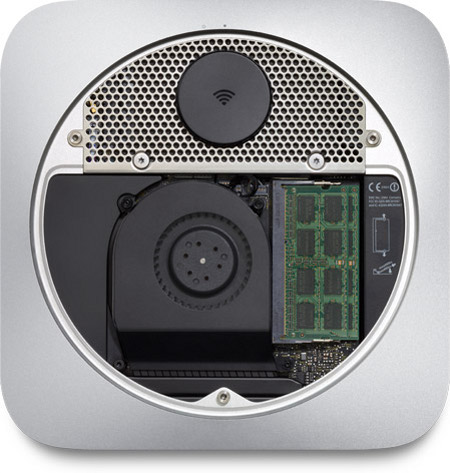 The delectable Mac mini from Apple is back again – this time updated with next generation Intel core processors, in addition to the introduction of new discrete graphics, high-speed Thunderbolt I/O technology and Mac OS Lion, the latest version of what Apple calls as “the world’s most advanced operating system”. That is certainly a very high billing to live up to, where the new Mac mini rolls out up to double the processor and graphics performance of its predecessor – never mind that the compact and efficient aluminum design are retained.

Just how much do you expect to pay for something this new? How about $599 as the entry price point? That is certainly quite a tempting figure to begin with, and for those living in the US, you can place your orders for the new Mac mini from today onwards – while the physical model can always be picked up from a brick-and-mortar store from tomorrow onwards if you prefer touching your purchase beforehand. To know more about what Apple has put into the new Mac mini, why not give the rest of the story after the jump a go?

Measuring what seems to be an impossibly 7.7″ square and 1.4″ thin, the new Mac mini is capable of coming in the same compact aluminum design while upping the ante in terms of performance and graphics capabilities thanks to some engineering genius. There are three different configurations to choose from, where you can have it run on the latest dual-core Intel Core i5 or Intel Core i7 processors with AMD Radeon HD 6630M discrete graphics, or a quad-core Intel Core i7 powered server configuration.

You won’t find any optical disc drive with this puppy though, but the Mac mini is capable of accessing optical drives on other PCs and Macs. Heck, it will also play nice with the MacBook Air SuperDrive if you so desire. The new Mac mini will max out at 8GB RAM, a 7200 RPM hard drive and a 256GB SSD for the ultimate performance in a small package – this is one dog that has a bite worse than its bark, if you want to find a way to describe it.