AppToyz Helicopter for an ‘appy landing 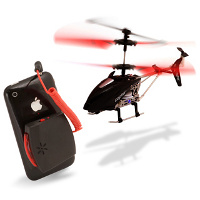 Ever wished you could pilot your very own helicopter, but did not have the money to go to flying school and finish up the course? Well, sometimes in life, you win some, you lose some – and this time around, you can still get your flying kicks with the AppToyz Helicopter. This £49.99 purchase is currently available for pre-order, where you will be able to use the iPhone or iPod to control this helicopter without having to work with a standard remote control instead.

Surely, this is one of the things that most people probably won’t think that the iPhone or iPod touch is capable of when said devices were first released. Good news then, you can now bring this sucker out for a flight, where there is a tiny unit which is plugged into the headphone socket, letting your smartphone or portable media player send flight commands over to the helicopter via infrared.

You will use an on-screen D-pad to move the helicopter around, and it might take some getting used to at first for those who prefer physical joysticks. There is an 8-meter flying range with this puppy, where you can opt for the following movements – full hover, left, right, up and down.