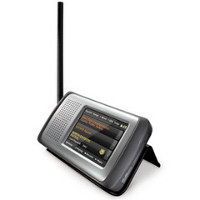 Let us be honest here, how many of you out there own a radio scanner? We would think that someone who does so probably has some sort of nefarious activity up their sleeves, such as robbing a bank or pulling off the next big museum heist. Looking for a radio scanner, your search might have led you to nowhere, but the Automatic Programming Radio Scanner could just be the item you’ve been looking for.

We’ve got to warn you first though – this puppy won’t come cheap at $599.95, but read on to find out why it costs six Benjamins. For starters, this is the only radio scanner which is capable of finding local police, fire, and emergency medical service channels automatically whenever you enter your location. It will come pre-loaded with radio channel information for the U.S. and Canada, and as its name says, there is no need for programming unlike other models.

All you need to do is enter a zip code or city and let it do its work, or run an auto scan instead, where it will automatically find all local unencrypted, non-proprietary radio system frequencies up to a 30-mile radius. This lets you monitor local police, ambulance, fire, utility, aviation, and federal bands, where among them include NOAA weather alerts.

Hardware specifications include a 3.5″ color touchscreen that offers easy navigation with your gestures. Transmissions can also be recorded and played back, while channel updates are delivered via the included software. A quartet of AA batteries can deliver up to 5 hours of juice, where plugging it in via an AC adapter will take up to 14 hours for a full charge.