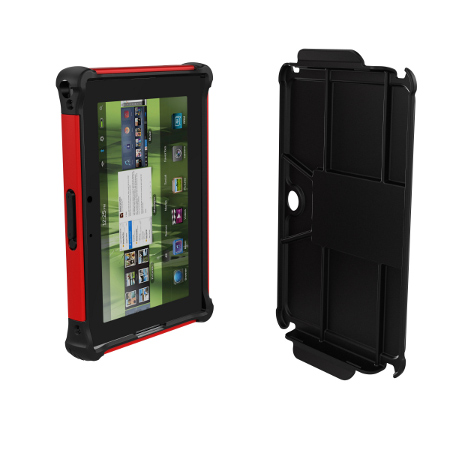 If you happen to be one of the few who picked up a BlackBerry PlayBook tablet, then chances are you aren’t too happy with the lack of software compared to the other two tablets which reign supreme at the moment – the iOS-powered iPad 2 (and its predecessor, of course) and those tablets which run on the Android operating system from Google. Granted, the BlackBerry PlayBook is solid in terms of its build, but good hardware is nothing when it is not paired up with decent software, and this is where Research In Motion (RIM) has failed.

Still, that doesn’t mean you need to toss your PlayBook away to some corner while you suffer from buyer’s remorse. No sir, you should hold fast to your convictions and bother the folks at RIM to entice even more developers to their side so that the PlayBook will be able to be on par with its rivals in the market at least where decent apps are concerned. Having said that, this would mean protecting your ‘investment’ – by getting it the Ballistic BlackBerry PlayBook tablet case.

Featuring Ballistic’s award-winning protective designs, you can be sure that your BlackBerry PlayBook is protected from most of the general dangers such as knocks, drops and scratches, making it a truly unique case to have hit the market. It is not going to allow you to use your PlayBook the next time you go scuba diving, but at least it ought to be able to handle the everyday rigors of life and more.

Boasting an impressive three layer protection, this case comprises of an inner silicone layer, impact resistant hard plastic, and a shock absorbent polymer layer, where all of them have been specially crafted so that your precious PlayBook is protected against the worst of drops. Not only that, reinforced Ballistic Corners will deliver an even stronger level of much-needed shock absorption.

Any takers for this?