Couple wedded by a computer 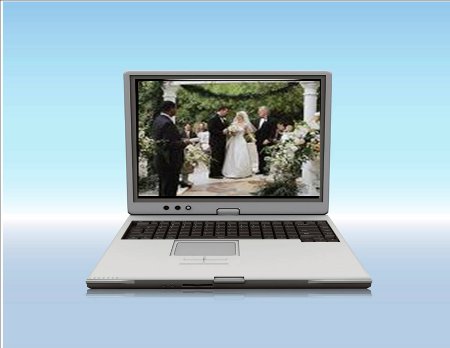 Getting married can be quite the stressful affair for any couple, as those who have run the gauntlet can attest to. There are just so many things to take care of, that even with the best wedding planner around, you can still forget something on the big day, and there will be hiccups which crop up as just like your spouse, there is no perfect wedding. Still, it can be as joyous as you make of it, and apart from the dress, tuxedo, cocktail dinner, invitations, cake, flower girls, rings, and band, there is one important person who needs to be there – a minister.

A couple from Houston, Miguel Hanson and Diana Wesley, decided to go against the grain by ditching the minister and settling for a 30-inch monitor instead. Yes sir, they will both engage the services of a virtual minister known as Rev Bit, who sports an animated, square face with blue eyes and thin, oval glasses. His synthetic voice will be played over a sound system , while a transcript of what he’s saying will appear on another part of the display.

Don’t you think that this is weird? Not quite, as Hanson is a Houston web developer and IT consultant, where he developed the minister software program after the couple realized their friend could not make it at their wedding as their minister. Hanson decided to roll up his sleeves and “write my own minister”, in his own words.

The wedding will be a totally geeky affair as the couple feel comfortable to fall under that mould. In fact, they met via a website known as “Sweet on Geeks”, and share science fiction and fantasy as part of their interests (apart from each other, of course). As for their cake, it will be made with Nerds (candy) as the topping instead of icing to go along with the nerdy theme.

As for the ceremony, it will happen in Hanson’s parents’ backyard in Houston, with 30 or so guests in tow. Rev Bit is also a joker, saying “If anyone here has anything to say that might change their minds or has any objections, they do not want to hear it and I will not recognize your objections since Miguel has programmed me to only recognize his commands.” to the amusement of guests.

What do you think man will think of next?