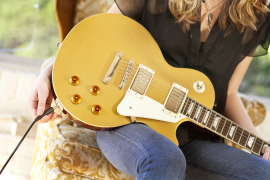 In case you haven’t heard, Activision has pulled the plug on Guitar Hero, which is a sign that the music video game genre is in decline.

When a video game genre is in such decline, you can do an Activision move and just “forget about it” or you can improve on it by reinvention. Ubisoft has decided to reinvent it as they are planning to create Rocksmith, a guitar game that uses an actual guitar.

Not that this hasn’t been done before. There is already Power Gig: Rise of the Six String which is essentially the same model. I believe that the last version of Rock Band, which is not giving up its hold on the music genre game, also has this feature.

I’m not certain what is going to make RockSmith different from these real guitar games, but I am told the title will launch with a “sizable library of music” which include the Rolling Stones and Nirvanna. Again, I’m pretty sure these music games have tunes by those artists.

I guess we will see how this plays out. Rocksmith will be coming out sometime for the Xbox 360, the Playstation 3, and the PC sometime after July.