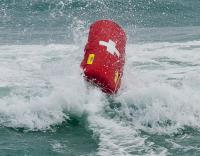 I have to admit, its awfully difficult to imagine that summer is coming, even though the snow has finally left us, the chill is still in the air, its right about now that I get sick of winter and start longing for the days when we can pack up and hit the beach, the smell of suntan lotion in the air, tropical drinks with little colorful umbrellas, buff lifeguards in tight orange bathing suits with whistles and white noses.

Unless of course your lifeguard happens to be E.M.I.L.Y, she still has the orange suit, but this new version of last years lifesaving robot also has batteries, recently added sonar and the ability to “swim” at about 28 miles an hour. Baywatch hunk she’s not, but I take my lifesaving however it comes. As we reported last summer, lifeguards at Zuma Beach in Malibu California tested out this new lifesaving companion, E.M.I.L.Y. (Emergency Integrated Lifesaving Lanyard) Now she is also capable of  actually locating a distressed swimmer, by herself, through this new sonar detection. E.M.I.L.Y. can also travel up to 80 miles on a single charge.

Lifeguards can toss this thing in the water, and it can find and get to a victim in no time and then tow them back to shore, E.M.I.L.Y. might now even be equipped with a camera and speakers so that the real lifeguard at the controls can give reassurance or instructions to the person being saved. Woman all over the world can heave a collective sigh of relief, Pamela Anderson has been replaced for less than $4000.00 bucks and she is available now. There goes my husbands drowning fantasy.