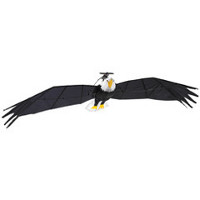 Remember the R. Kelly hit song, “Fly like an eagle”? Well, with those living in the northern hemisphere swinging into spring, it makes perfect sense to start planning on how you are going to spend more time outdoors with your loved ones – be it a picnic or just playing catch. Well, Hammacher has a new toy for you to, er, toy around with, where we’re talking about the 9 1/2′ Remote Controlled Bald Eagle.

Now this American icon will now come in the form of a toy, where it boasts of the form of an engine and propeller-powered prodigious avian which is capable of soaring up to 100′ in the air. Meant to create and inspire awe from all who see it, the eagle’s 9 1/2′ wingspan is capable of creating an airfoil which will catch the wind to provide lift and enable broad turns. More on this pretty unique toy in the extended post if your interest has been piqued.

The 9 1/2′ Remote Controlled Bald Eagle’s engine will tip the scales at less than one ounce, but this is a case of not judging a book by its cover – or rather, a toy by its engine. Capable of generating over 30X its weight in thrust despite its size to replicate the bird of prey’s rapid dives and powerful soaring, you can be sure that the “Remote Controlled Bald Eagle performs swift loops and it even hovers in-place against the wind like a real eagle” – at least that is what is claimed by Hammacher Schlemmer’s General Manager, Fred Berns.

The transmitter trim controls will be able to deliver precise adjustment of the propeller in order to move the eagle left, right, up, or down in mid-flight. It is made up of a carbon fiber frame alongside a rip stop nylon and polyester body, letting the eagle fly in moderate winds of up to 10 mph, while withstanding turbulent landings.

For those who are interested, you will be able to pick up the 9 1/2′ Remote Controlled Bald Eagle for $499.95. Not exactly the cheapest gadget or toy out there for your kid, and you would do well to fly this under adult supervision since it does look pretty fragile at times. Hopefully other eagles won’t mistake it for a rival and start attacking it.