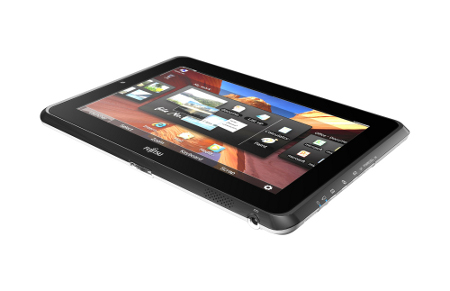 Forget about regional launches – Fujitsu has just announced its Stylistic Q550 slate PC around the world, where it offers executive class performance with high-security in mind to cater for the requirements of mobile enterprise computing. These slate PCs will arrive in a couple of months’ time (that is April just in case you happen to lose your bearings on a calendar).

To maintain Fujitsu’s long heritage of creating tablet PCs for professional and executive users, the Fujitsu Stylistic Q550 slate PC comes with built-in security from the ground up, letting it comply with the most stringent ICT security requirements of governments and businesses. It will definitely cater for enterprise mobile computing demands, and won’t find any problem integrating itself seamlessly into existing ICT infrastructures.

After all, consumer-class smart phones and tablets tend to be rather lax in security compared to corporations which might result in security breaches, Fujitsu has decided to take an alternative approach with the introduction of a companion device specially designed for maximum interoperability with business environments. It will play nice with Microsoft Windows 7, so you need not fret about modern software compatibility.

Other usability features which might just stoke your boss’ interest might be its full work day battery runtime, a brilliant anti-glare 10.1-inch screen which works great equally indoors as well as outdoors, connectivity options such as Wi-Fi, Bluetooth and optional mobile broadband 3G/UMTS to boot.

Data entry is also a snap on-the-go thanks to its multiple touch interface with precise and pressure-sensitive pen input. The Stylistic Q550 is smart enough to automatically recognize when users are working with a pen, letting them rest their hands on the screen when writing. With the inclusion of built-in handwriting recognition software, it will be able to convert input to text. Whenever the pen is stowed away, the slate PC will automatically re-adjust itself to a touch interface.