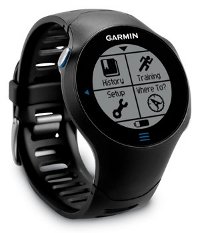 Do you participate in triathlons as though it was a walk in the park? Those who nod their head in agreement would want to get a timepiece that is capable of living up to their highly active lifestyle – we’re talking about the Garmin Forerunner 610 sports watch. As you know, Garmin deals mostly with GPS navigation systems, and when they aren’t dreaming up of better ways to let you know where you’re going, along comes an idea like a GPS watch.

This slim, robust and weatherproof touchscreen device will cater for serious runners who want an advantage during their routines, as the Garmin Forerunner 610 is capable of shrugging off water like a duck, and is responsive enough to work even when you’re wearing running gloves. Basically, the Forerunner 610 intends to stick to you like a barnacle, coaching you at every single step to help you cross the finish line in the fastest time possible.

The Forerunner 610 lives up to its billing though, since it is capable of “going ahead” of you in some way so that you can figure out the next move as you digest an inflow of basic information including your pace, distance and time, keeping track of your effort via your heart rate. This will help you create interval workouts or perhaps even race a friend who is residing on a different continent from yours.

A vibration motor inside the Forerunner 610 will be able to let you know your training intensity courtesy of the new Training Effect feature. Basically, any well read athlete need not have a coach or sports scientist right beside if you know what to do with the kind of information garnered by the sports watch itself. Also, you can learn to do your best always thanks to Virtual Racer, letting you race yourself or the previous bests of other users – sort of like the ghost function in Mario Kart as you zip around the track to beat your previous best time.

There is no word on pricing just yet for the Garmin Forerunner 610, but with it being a flagship, we don’t think it will be cheap. On the bright side, at least your pockets will be lighter after getting this so that you are more fleet-footed.