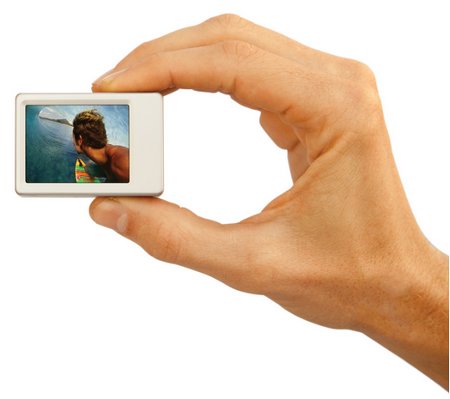 GoPro is a name that is more often than not associated with wearable as well as gear mountable cameras, and to manufacture those, it also makes perfect sense to have accessories accompany them. Come to think of it, accessories for cameras are somewhat the equivalent of french fries and a Coke to go along with your main burger meal, right? What we will look at today is the LCD BacPac detachable LCD display.

The name itself more or less gives it away, as this is a detachable LCD display that will accessorize your HD HERO camera, being the first in a line of expansion modules that is set to hit the HD HERO camera in due time. You will be able to place your order today at GoPro.com, although those who are not in a rush can always wait until it ships to retailers worldwide. The asking price? $79.99.

How does the LCD BacPac attach itself to your 1080p HD HERO camera like a barnacle? Well, it will do so via the HERO Port, which in essence is a small expansion port that is located on the back of the camera. Since this is a removable accessory, the LCD BacPac will help the HD HERO camera maintain its status as a small and light device, while delivering the convenience of an LCD screen when attached.

Among the benefits and convenience of a detachable LCD screen on your HD HERO camera would be easy framing of complex scenes; letting you see exactly what you are shooting, the ability to playback video and photos directly on the HD HERO camera, turning the HD HERO into one of the world’s most powerful everyday cameras while making it one of the more versatile ones on the market.

This seems to be the perfect present for those who already own a HD HERO camera and want to expand their video shooting ability.