How long can you last on Dance Dance Revolution? 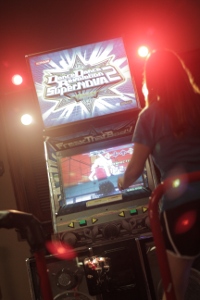 I am quite sure that those of you who were involved in the video gaming scene back in the late 1990s would definitely have heard of this arcade phenomenon known as Dance Dance Revolution, where you are supposed to align your movement with indicators on the screen right in front, stepping on the corresponding sensor pad at the right time in order to progress in the game. Of course, many iterations of this game have been released after that including those with motion sensors, but the one which started it all off was the Dance Dance Revolution franchise.

Who would have thought that a video game like that might end up as a world record of sorts in the Guinness Book of World Records? Carrie Swidecki, a 35-year-old public school teacher from Bakersfield, California actually decided to prove to the world that she has the endurance to play the game for 15 hours straight – adding on to that 17 minutes and 44 seconds, besting the previous world record which stood at 13 hours, 33 minutes and 56 seconds that was set in the UK last October.

Carrie is the world record holder under the Longest Marathon on a Dance/Rhythm Game category with Dance Dance Revolution, or more affectionately referred to as DDR. According to Carrie, “I couldn’t be more excited to have broken the Guinness World Record through exergaming. I started playing Dance Dance Revolution 10 years ago, and when I saw that it was helping me become more physically fit, I integrated it into my physical education program at school and the students love it. Since then, I’ve become more active, lost 75 pounds and set a new world record!”

This second grade teacher trained for half a year in order to make this attempt, and her presence would surely boost the case for students at her school pestering their parents to purchase a new Wii, Xbox 360 or PS3, that’s for sure!