JVC first off the blocks with 3D video recording camcorder 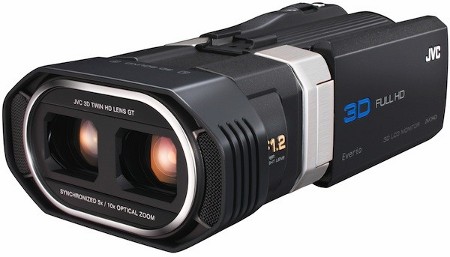 3D is the big buzzword these days – heck, we have even heard of the Wimbledon 2011 finals being broadcasted in live 3D to select countries, although we would like to see future sporting events like the UEFA Champions League or even the London Olympics next year get the 3D treatment if companies want to go the length and breadth of promoting such technology into your home TV.

Well, forget about all the other companies and let us concentrate on what JVC has to offer us – we’re talking about the new JVC GS-TD1 that is touted to deliver 3D video recording in Full High Definition, thanks to a couple of camera lenses and an equal number of imaging sensors – one for each lens – in order to capture three-dimensional images in the same way that human eyes work. The results can be said to be more or less stunning.

Of course, it goes without saying that any video shot using the GS-TD1 can only be viewed in 3D – although the plus point that you have here is this, you are not limited to any kind of JVC ecosystem since you can use just about any 3D-capable TV to watch those precious memories recorded in 3D. Not only that, the camcorder can also shoot 3D video which can be burned to a Blu-ray disc or DVD-R for 3D playback on a compatible Blu-ray player.

As mentioned earlier, the JVC GS-TD1 will come with a couple of 3.32 megapixel CMOS sensors and a new JVC-developed high-speed imaging engine which is capable of processing both Full HD images – left and right images at 1920 x 1080i resolution. With a trio of shooting modes on offer, this lets you choose from several options for HD resolution and archiving of 3D footage.

Other hardware specifications include 64GB of built-in flash memory, an SDXC card slot, 3D optical 5x zoom, Optical Axis Automatic Stabilization System for disparity control to give depth to 3D images, and Automatic Parallax Adjustment to optimize the 3D-video comfort zone. Just to keep up with today’s trends of touchscreen sensitivity, it also comes with a 3.5” 3D touch panel LCD monitor which displays 3D images without the need for 3D glasses – hmmm, sounds like some Nintendo 3DS action going on here.