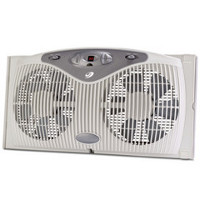 Once in a while, along comes a gizmo that will work much better than everything else on the market. For now, Hammacher is offering the Low Profile Window Fan which is touted to deliver superior airflow without being complicated to use – on the contrary, it has been tested and rated to be more or less dummy-proof even in the hands of luddites. Dubbed “The Best Low Profile Window Fan” by our friends over at Hammacher, it is capable of moving a greater volume of air (we’re talking about 58% more compared to the second-ranked model), where analysts’ anemometer readings showed that its dual motors are capable of rolling out 608 feet-per-second air streams from 5′ away, which is far better than the second place model that mustered a mere 560 fps.

This is one highly efficient unit that works great without disturbing the peace around you, since it produces low noise at all three speed settings despite resting a mere 12″ high in a window to minimize view obstruction. Its side panels will easily slide out to fit 40″ wide double-hung or slider window frames. As for the dual fans, they’re reversible and are able to operate independently, so that one fan can draw air inside while the other pushes air outside for optimal circulation. At $59.95 a pop, it certainly won’t burn a huge hole in your pocket, either. Makes the perfect gift for this coming sweltering summer, don’t you think so?