LP And Cassette To CD Recorder 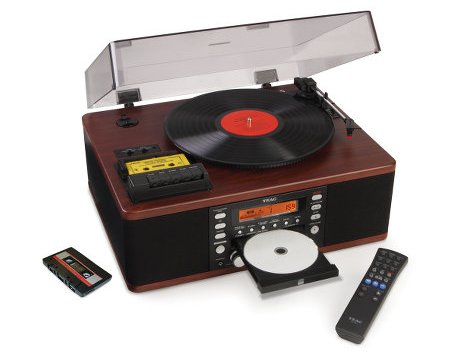 Here is something that is not meant for folks who want to live in the present and look forward to the future – rather, the $399.95 LP And Cassette To CD Recorder will cater for those who prefer to dwell on past glories. Come on now, who still wants to deal with CDs? Those things get scratched all too easily, and they’re bulky to carry around when you compare it to a standard microSD or SD memory card that stores MP3s aboard.

Hammacher’s quirky offering of the LP And Cassette To CD Recorder will be able to transfer your classic vinyl records and (still working) cassette tapes through the recording of its tracks onto CDs. All it takes are three steps and you’re done – heck, you can even pause to select only certain songs during recording, turn the album or cassette over, as well as change albums and cassettes so that you can make compilation recordings. Not only that, this is a capable LP player as it does 33s, 45s, and 78s, in addition to cassettes via its 70mm full-range speaker.

Bored of regular music? There is always the integrated AM/FM stereo with digital tuner as well as a single CD playback tray, while a couple of RCA inputs in the rear will let you connect the device to another stereo system or external speakers. You will be able to play LPs for up to 50 hours before the needle needs a replacement.