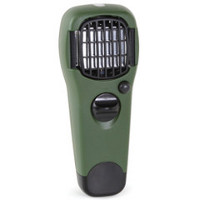 Getting bitten by bugs, especially those blood sucking mosquitoes, isn’t anyone’s idea of fun when camping in the great outdoors, don’t you think so? We too, subscribe to a similar idea, which is why we tend to look out for gizmos such as the Military Mosquito Countermeasure. The name itself is pretty much self-explanatory – after all, if it is good enough for military personnel who are abroad, surely it is good enough for those of us back home, right?

Proven to be up to 98% effective in repelling mosquitoes in field tests that were conducted by the Walter Reed Army Institute of Research, this neat little gizmo will rely on d-cis/trans allethrin, a synthetic version of a naturally occurring insecticide that is commonly found in chrysanthemum. Perfect for those who spend plenty of time outdoors be it gardening, camping, or other forms of recreation, this countermeasure will slide into an included pouch that is equipped with belt loops and a sturdy clip, making it a snap to tote around.

A 2 1/2″ x 1 1/2″ mat that is saturated with repellent will be slid into a metal grill, where a butane-fueled heater vaporizes the repellent to create a 15′ x 15′ zone that is virtually unbearable for mosquitoes and other biting insects. Each $34.95 purchase comes with a sole butane cartridge and a trio of ThermaCELL Mosquito Repellent mats, where the former lasts up to a dozen hours, while the latter lasts 1/3 of that.