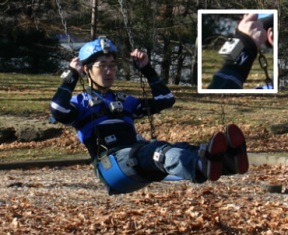 I recently saw some footage of how Disney made their film Mars Need Moms. It showed Seth Green in a skintight suit with dots all over his face and small balls in certain places on his body.

Too bad Mars Needs Moms was such a flop, but Disney is working with Carnegie Mellon to create a new system of motion capture. It works by placing cameras all around the actors, which enables them to give a virtual performance from anywhere.

Normally, actors have to be in rooms with greenscreens, so the backgrounds can be put in later. This new method takes about 24 cameras to create this effect, and it is a great timesaver. For example, if you want a scene where someone does some physical motion, this new mo-cap system can get all the data, and the director can tweak it later.

Unfortunately, this process is costly. Eventually the director has to ask him or herself if it is just easy to do all of this animation in the computer, and to heck with proper motion capture. That, or just film a live-action movie with several takes of the same scene in action.

I guess it is just a matter of time before someone comes up with something like this in an inexpensive way and can change cinema as we know it. In all honesty, I’m sort of upset at some of the motion capture that has come out today by Robert Zemeckis, and I would love to see any improvement in this area.