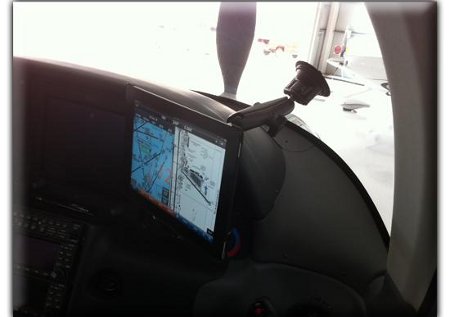 Have you heard of MyGoFlight before? Neither have I, but the good thing about it is this – I now have, and soon, you will, too. MyGoFlight is actually a company that is focused on the iPad In Motion for aviators, and they have just rolled out the iPad Sport series for both kneeboard and cockpit-mounted uses. This particular device will enhance a product line which already comprises of the iPad Kneeboard Pro, external GPS devices, iPad Flight Bags, and accessories including in-flight power adapters, anti-glare screen protection, night vision pens, RAM mounts and other similar items.

According to Charles Schneider, CEO of MyGoFlight, “The iPad Kneeboard Pro was launched last year and has been very successful. However, some pilots expressed the need for a case that could be used in aircraft where space was tight or on a mount. The Sport case is for those looking for maximum utility in the least amount of space, quick-connects to RAM mounts, works with Apple’s Smart Cover (iPad 2) and is very ‘Apple cool’ for use as an everyday case in and out of the airplane.”

Looks like pilots have something that they will be able to make full use of now, eh, especially for those captains who are in charge of trans-continental flights, and have seen all the in-flight movies for the umpteenth time that they might just want to see what else their tablets can provide instead. After all, what makes the iPad Kneeboard Sport so special is this – it was designed by pilots for pilots.

It will function in aircraft where there is a cyclic or control stick used between the legs, or whenever there is very little room to move around. the iPad Kneeboard Pro will play nice in just about all and any aircraft, and is also ideal for helicopters and other sport aircraft – basically fitting in to a T whenever there is tight yoke clearance. It can also be used with a RAM mount that is secured directly to the airplane.

Seems to tie in perfectly with the FAA issued guidance (InFO 11011) earlier this year in May, where it defines the iPad as an Electronic Flight Bag (EFB) device and as a substitute for carrying paper.