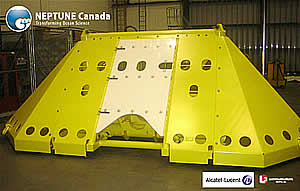 Studying the sea is very important to more than just biologists, and the Neptune Canada is the “world’s largest cabled undersea observatory”.

It isn’t just called Neptune because it is under the sea, but it is a very clever acronym for North-East Pacific Time-series Undersea Networked Experiments. Whoever thought of that acronym is a complete genius. The Neptune has sensors located in Western British Columbia, through the Juan de Fuca tectonic plate, and stretches out over 530 miles.

There are six nodes spread out at various locations, and I believe that one of them is seen in the image here. It has 250 instruments in between these nodes, and it has collected 10 terabits of scientific data since December of 2009.

All of this amounts to sensors that measure and record still and video images as well as scientific data such as microbe samples, temperature, pressure, salinity, and current flow. All of this data is available to the public for free a tthe official website.

As you might have guessed, this system costs $106 million to install, and needs $12 million to maintain its services. I wonder if we have discovered any valuable enough data to justify this expense, or else this product will just be abandoned at the bottom of the ocean.