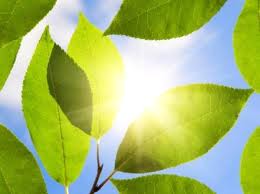 It’s no surprise that we are involved in an energy crisis, the reasons why are being debated worldwide, and I guess everyone has an opinion, but that being said, it’s a problem nonetheless. In order to make a contribution to the energy issue, scientists are developing a new high tech weapon in the race to become self sufficient, the leaf. Yes, you read it correctly. Allow me to explain…

In order to create artificial photosynthesis scientists have built a mechanical version of the leaf. Using the leaf, water and sunlight to strip H2 out of H2O they can make hydrogen fuel, all by using only the materials that make up solar cells. Using a silk screen and solar paint they make a white film on a glass slide and die it in order to capture the energy from sunlight and then to produce cheap electricity. Watch a short video HERE

“A practical artificial leaf has been one of the Holy Grails of science for decades,” said Daniel Nocera, Ph.D., who led the research team. “We believe we have done it. The artificial leaf shows particular promise as an inexpensive source of electricity for homes of the poor in developing countries. Our goal is to make each home its own power station,” he said. “One can envision villages in India and Africa not long from now, purchasing an affordable basic power system based on this technology.”

So in building an artificial photosythesis device that uses sunlight, a membrane and a catalysts one can only hope that we can eventually end our dependence on petroleum and provide an abundant energy source that won’t pollute our planet. Now wouldn’t that be nice?