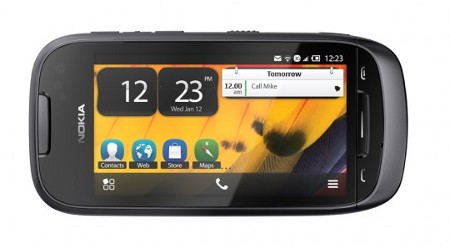 Most smartphones these days come in the touchscreen variety, and it goes without saying that regardless of how big you were a player in the phone industry some time ago, you’ve gotta keep up with the times if you were to survive. Nokia is battling against losing its market share, and in their latest effort, they decided to release a smartphone that has one superlative in it – the Nokia 701, which is touted to have the brightest smartphone display available to date.

This claim by Nokia is made possible thanks to the 3.5″ IPS LCD display that features ClearBlack technology, where it will work in tandem to create a combination of unprecedented brightness as well as contrast. Sporting the highest number of NITs where smartphone displays are concerned, it is also hardy in its own right, with Corning Gorilla Glass covering it so that you need not worry about a single drop shattering it in all ways to Sunday.

Apart from the bright screen, what else can we look forward to for the Nokia 701? How about a 1GHz processor to start off with for instance? With pentaband radio support, you can be sure that this puppy is going to travel around the world without missing a beat, and even more interesting is the fact that it will ship with the latest version of Symbian, that is, Symbian Belle.

A fast processor needs a speedy graphics co-processor to keep up with it, and the Nokia 701 does not disappoint in this department, boasting a faster clock as well as having four times the amount of graphics memory that is found in previous Symbian smartphones.

If you want to capture memories of everyday occurrences, then the 8-megapixel camera will definitely come in handy. This full focus camera will sport a dual-LED flash right at the back, while there is also a secondary camera that is located in front just in case you want to hold video calls from wherever you are.

All your data is stashed away onto 2GB of internal memory, and if you think that is not enough (on second thoughts, don’t think – I’m quite sure it won’t be enough), how about popping in a 32GB microSD memory card instead?

Despite being super bright, this doesn’t mean the battery is going to leave you high and dry – no sir, the Nokia 701′s battery has been rated to last for up to 17 hours of talktime over GSM. If you’re interested, the Nokia 701 will come in steel dark, silver light, amethyst violet, and white colors, where it is tipped to arrive sometime in Q3 this year for around 290 Euros.