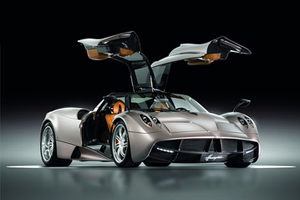 Some of you have heard about the Zonda, a huge leader in top speed and power contests for automobiles.

The Zonda is made by Italian supercar manufacturer Pagani Automobili SpA. They have a new model called the Huayra, named after the ancient God of the wind Huayra Tata.

It has a six-liter, 12 cylinder engine with two turbochargers built by Mercedes-Benz’s AMG performance unit. This engine “breathes through a pair of air intakes behind the occupants that the company”, and is a “tribute” to supersonic aircraft of the late 1950s and 1960s.

So far, Pagani has developed five Huayra prototypes, and has road-tested for about the past four years. They traveled for more than 300,000 miles and they plan to cover about 600,000 miles before they come to the United States.

The Huayra is planned to debut at the Geneva Motor Show next month, and the price is going to be about $1 million dollars.

Remember in the Austin Powers movies how everyone laughed when Dr. Evil would say “one million dollars”. I don’t think I can laugh after hearing this price, because I see one million dollars as quite a lot of money. However, I will say that price is worth it, as this silver car with the gull wing doors look rather sexy.