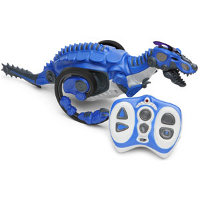 Back in the days when dinosaurs roamed the earth, they battled it out with each other in colossal fights, literally throwing their weight around to gain the upper claw. Well, all it took was a wayward meteor to end their reign on earth, and fast forward to today, we have dinosaurs that come in the form of robots. Far smaller than their original ancestors, these still retain their mean streak, and do not take too kindly to another dinosaur roaming around their fields.

Of course, since the R/C Battling Robot Dinosaurs come with a remote control, it would allow you and your mate to settle a dispute without shedding any blood at all – yes sir, we’re talking about driving this robo raptor around the home to have it roar as well as attack another robo raptor, or if you prefer to go for the jugular, target your human friends instead. Don’t want to control it and see how its pea-sized dino brain works? Just turn on the autonomous mode and have it move around the room to defend and hunt by itself.

IR beams are used in a “battle” between two robo raptors to see which will emerge the victor, and at $39.99 a pop, just make sure you have a healthy supply of AA and AAA batteries (rechargeables are highly recommended here) if you do not want the fun to stop halfway. The R/C Battling Robot Dinosaur itself will need four AA batteries, while the controller runs off a trio of AAA batteries.