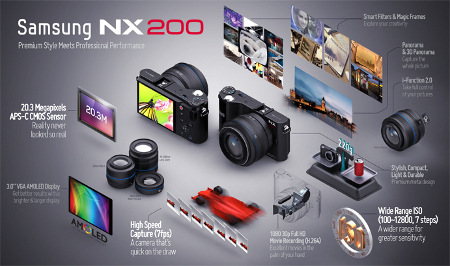 When it comes to digital cameras, Samsung is a relatively new player to the game if you compare their history with the other more established players such as Pentax, Olympus, Nikon and Canon – but that doesn’t mean Samsung is no good at it; no sir, Samsung has picked up the pace in the game rather fast, and with their latest NX200 compact system camera, it is capable of delivering professional standard photography in a relatively small package.

Yes sir, the Samsung NX200 is said to guarantee an easy experience which allows you to unleash your creativity to the maximum thanks to a bunch of high-performance features that have been included in the compact premium metallic design, where it no longer leaves you with the dilemma of picking between style and quality images.

With the Samsung NX200, you will be able to achieve the balance between design and professional performance, where you get DSLR quality imaging in a compact form factor, thanks to its 20.3-megapixel APS-C CMOS sensor that was developed specially by Samsung themselves. Guess this will ultimately help lower the price point of Samsung’s shooters since there is no need to pass the extra cost down to the consumer if Samsung were to obtain the sensor from another party.

The NX200 is capable of hitting 100ms Advanced AF speed courtesy of its Fast Boot and seven frames per second continuous shooting, and heck, you need not miss that crucial moment in your life as you are able to move from shot to shot in only 400ms. Apart from that, there is a wide range ISO (100-12800, covering seven steps) gives life-like color and sharp details, while shooting in low light conditions is a snap.

Not only that, you can also capture video instead of stills at 1920 × 1080 resolution at 30fps. No idea on pricing or availability just yet, but if you’re at IFA 2011, you can check it out there.