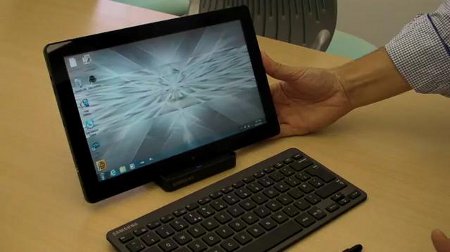 Samsung seems to be on a roll these days in the world of consumer electronics (actually, they’ve been banging it in for quite some time already come to think of it), what with their range of electronic items that elicit nothing but a “Wow!” from the masses, ranging from ever slimmer LED TVs, 3D TVs and top of the line Android-powered smartphones. Well, the notebook and tablet categories are not left alone either, and this time around we have the Samsung Series 7 Slate PC to drool over.

This is a lightweight slate computer that sports full PC capabilities, powered by Microsoft’s Windows 7 operating system. First unveiled at the recently concluded IFA 2011 show, the Series 7 Slate PC is said to deliver all the trappings of a full-sized laptop without sacrificing on form factor, making sure those who are always on the move will be able to take advantage of the processing muscle that has been crammed within to deliver maximum productivity no matter where one is.

Just how light is the Samsung Series 7 Slate PC? Well, it will weigh no more than two pounds, measuring a mere 0.5″ thin, making it highly portable in its compact size. Don’t be fooled by the rather fragile exterior – the Slate packs an 11.6″ display, running on an Intel Core i5 processor (which is mid-range and should be more than enough for the average office user), and stashing away up to 128GB of storage space in the form of an SSD. Connectivity options include USB, Wi-Fi, WiMAX and HSPA.

Since there is the word “Slate” in its name, obviously the 11.6″ display comprises of a highly responsive capacitive multi-touch screen, where you can also opt to flex those finger muscles of yours by writing naturally on the screen via an electromagnetic pen. At the front is a 2-megapixel camera for vain self-portraits and video conference calls, while the back lies a 3-megapixel camera to capture some impromptu moments.

Is it me, or does the 7 hour battery life have to do with the name? I suppose not, making it a coincidence, but for those who are interested in the Samsung Series 7 Slate PC , you will have to fork out anywhere from $1,099 to $1,349, depending on the final hardware configuration as it arrives at the market this coming October 2nd.