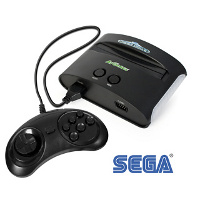 Roll back the years with the Sega MegaDrive Console from Firebox – makes you wonder what you’re doing with a 16-bit console when today’s gaming devices are even able to offer 3D – and on the road, to boot? Well, sometimes classics just don’t die, and neither do they fade away. Take the Dreamcast (another Sega product) for example, now that’s a console that died way before its time, and yet had independent developers continue churning out games for it.

Today, we shall look at the Sega MegaDrive that is available for a mere £34.99, pocket change for some. Featuring old school titles that will definitely bring back fond memories of your formative puberty years, you will get 10 pre-loaded titles such as Alien Storm, Altered Beast, Columns, ESWAT, Fatal Labrynth, Golden Axe, Shadow Dancer, Streets of Rage, Streets of Rage 3 and Sonic Spinball. All you need to do is plug it into your TV and you’re good to go, since it already comes with a couple of six button controllers.