Self-thinking robot can learn by itself via AI 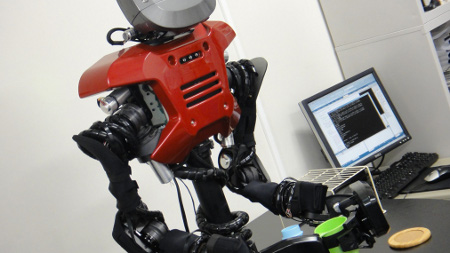 How many of us look forward to the day where artificial intelligence (AI) rules the roost? Surely AI has already come a long way by now, with many things in our lives being automated in ways we never thought possible before, but there are always new glass ceilings to break, no? Enter this unique robot that is being developed by the Hasegawa Group at the Tokyo Institute of Technology, where it is capable of thinking, learning and acting all by itself, thanks to the power of AI.

The technology used is known as a self-replicating neural network, or SOINN (Self-Organizing Incremental Neural Network). Basically, it will help the robot think in the same manner as that of humans, especially when it makes an attempt at tasks that have never been performed before. To put it in a nutshell, this robot is capable of making educated guesses and decisions based on what it has gone through in the past as well as its knowledge database.

There was an experiment which involved the robot solving a problem, where it had to make the right move as well as in order. For example, the robot is told to pour a glass of water, ensure it becomes cold, and hand it to a particular person. The robot will then have to think on getting the task done after studying its surroundings, own situation and what it had gone through in the past.

“So far, robots, including industrial robots, have been able to do specific tasks quickly and accurately. But if their environment changes slightly, robots like that can’t respond. This robot remembers only basic knowledge, and it can apply that knowledge to its immediate situation. If it doesn’t know enough, it stops, and reacts by saying, “I can’t do this because I don’t know how.” So, if you teach this robot just the things that it can’t do, it incorporates those things as new knowledge, and it can solve the problem overall, by including that knowledge.”

The robot’s sensory information will comprise of visual, auditory, and tactile data, and SOINN will also be able to obtain information from other sources such as the almighty Internet and tap into different robots’ experiences and knowledge so that it eventually ends up smarter than ever before. Scary, huh, they might just solve problems such as world hunger and poverty eventually instead of bickering around like how politicians do.