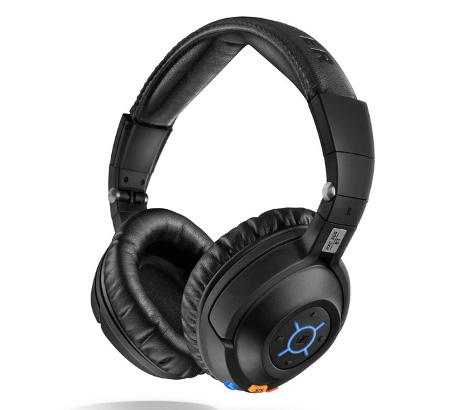 Sennheiser intends to blow your ears away with a couple of their latest releases – the PX 360 BT and PX 360 collapsible, circumaural headphones. Of course, these debuted at the recently concluded CES 2011, and since we didn’t have the time to cover all the good stuff that came out, we thought that audiophiles would definitely want to hear about these two.

Of course, don’t judge a book by its cover – in this case, a pair of headphones by their ability to be folded away into a pocket-sized package – the new PX 360 BT and PX 360 are no slouches when it comes to performance, with the former’s “BT” suffix depicting Bluetooth connectivity support, while the latter will rely on the traditional wired connection.

It doesn’t matter where you are whenever you put on the PX 360 BT and PX 360, as either model will allow you to immerse yourself in Sennheiser’s rich world of sound. Featuring a natural sound with strong bass, the powerful Neodymium magnets thrown inside alongside Sennheiser’s Duofol diaphragms ensure detailed, lifelike sound reproduction with a frequency response of 15 to 22,000 Hertz. There is also a very good reason behind the closed design of the headphones that ensures background noise is effectively kept out, letting you enjoy music in peace even in noisy environments.

The PX 360 is touted to offer an exceptionally comfortable fit despite it being a wired headphones, where soft circumaural ear cushions allows you to wear it on without any adverse effect for hours on end. As for the Bluetooth-enabled PX 360 BT, it will allow you to play nice with a wide range of portable video and audio devices. The inclusion of SRS WOW HD SurroundSound technology helps spatially expand the sound image to offer an intensive sound experience with powerful bass.

Needless to say, all functions are activated and controlled by a control unit integrated into the ear cup. Stashing them away is a snap, just fold them and you can be on your way. Don’t fret about them cracking, since the folding headband has a metal reinforcement for maximum mobility and durability, while each purchase comes with its own carrying case. The PX 360 and PX 360 BT will retail for $199.95 and $399.95, respectively.