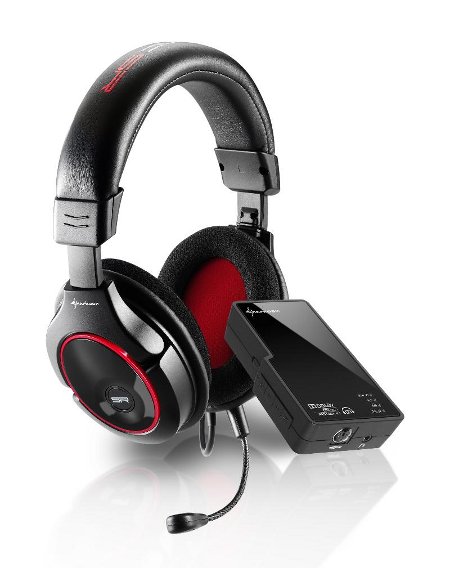 Gamers can be quite a fussy bunch, especially those who are at the top of the hierarchy. They want nothing less than the best hardware to go along with their skills, and that comes across as no surprise since it is human nature to feel that way. Well, if you are interested in gaming headsets and currently pondering just which model suits your ears (and favorite game) best, perhaps you would do well to consider what the Sharkoon X-Tactic SR gaming headset offers on the table.

CompuExpert has just announced the Sharkoon X-Tactic SR that will ship this coming August 16th in North America as an Amazon.com exclusive. Sharkoon has already picked up accolades in the past for their specially designed gaming headsets, so the Sharkoon X-Tactic SR gaming headset is going to be another potential feather in its cap down the road. Touted to deliver the ultimate in multi-directional audio performance for maximum immersion and combat advantage, the X-Tactic SR is not going to weigh down your ears, letting you play in comfort for hours on end.

To put it in a nutshell, you will be able to hear explosions, commands as well as other kinds of audio quality that the game’s developer intended you to experience it thanks to the Sound Control Unit (SCU) alongside the new 3D Sound Expander. The X-Tactic SR will boast of Dolby Digital 5.1, Dolby Pro Logic II and Dolby Headphone support, resulting in entirely new sound dimensions which enables you to hear enemies approach from just about any direction – letting you respond in advance before they know it. Not only that, you can connect to a second headset with the 3.5mm jack, letting up to enjoy excellent surround sound simultaneously.

The Sharkoon X-Tactic SR gaming headset will be compatible with the PS3, Xbox 360, PC or tablets – basically any other device that has a 3.5mm jack, and has an in-line volume controller that allows you to configure your personal sound. A cushioned headband, individually adjustable, padded cups and a flexible, detachable microphone rounds off the list of features. Since it runs off USB power, you need not worry about toting an additional charger or batteries.

Expect Amazon to carry the Sharkoon X-Tactic SR for $139.99.