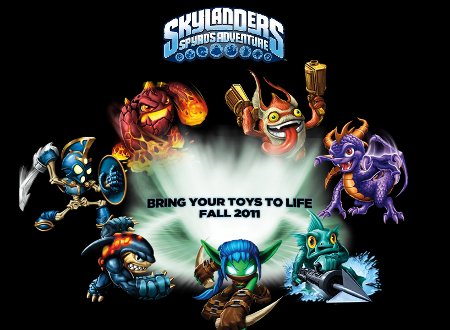 I remember back in the day when I was still a young ‘un, games were more often than not moments where imagination was required. Imagine cops and robbers or cowboys vs Indians – those classic physical games involved plenty of running around and screaming, and we needed no pixelated adventure to spur us on or remain addicted.

How times have changed, where today, nothing less than 1080p and a large screen HDTV is enough to grab the attention of your little ones. Activision has announced Skylanders Spyro’s Adventure, an entertainment breakthrough that will target both toy and video game industries. Using technology in an innovative manner, the game will enable players to transport real-world toys into virtual worlds of adventure via the “Portal of Power.

These “toys with brains”, or so they’re called, are able to come to life inside the game in connection with multiple gaming platforms, not to mention handheld gaming devices, mobile devices and on the web. All your achievements and level-ups will be remembered wherever they go, marking a wholesale change in the interaction between toys and video games, while opening up new possibilities and revenue streams for both industries.

According to Eric Hirshberg, CEO of Activision Publishing, “These are more than action figures. They are inter-action figures. By pairing world class character design, world class video game design and world class story telling into one entertainment experience, we’ve given players a whole new genre that bridges the gap between the real and virtual worlds. From the first time a kid picked up a stick and pretended it was a sword, toys have unlocked kids’ imaginations. And how often have you wanted to bring those toys to life, to see them become animated and take them on an adventure? Skylanders Spyro’s Adventure does just that.”

No idea on pricing just yet, but you can be sure that your little ones won’t be disappointed if you get them this during the year (or even during the holiday season in December).