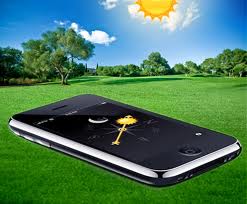 So, I take my cell phone with me no matter where I go. I consider it a luxury, but I also like to think that I would have it with me in the case of an emergency, like when my brand new car broke down this morning, and I was stuck on the side of the highway. Oh I had my phone alright, but the battery was dead, and the charger was in my other (and I guess, better) car.

Well that wont ever happen to any of us again if Apple has it’s way. According to U.S. patent reports, Apple wants to be able to incorporate solar cells into some of their touch screen products. Can anyone say iPhone 5? Okay, can anyone say iPhone 6 then? Anyway, let’s imagine if you will, the premise of throwing your phone up on the dashboard and having it be ready to go anytime you need it. Awesome.

The Cupertino giants have a better idea for solar-charging than just sticking a whole bunch of ugly solar panels on the back of their iDevices, the plan seems to be to put energy collecting cells hidden underneath the ever popular touchscreen display. So the hope would be that the iPhone won’t look much different, but would be able to charge itself cord-free!

It’s not that solar powered cell phones haven’t been lurking around for a while. In fact, a couple of companies have already waved around some prototypes of solar powered phones quite a while ago, but they’re not here yet, and when a company like Apple starts talking solar, I say let the sun shine in. Of course I don’t know what you say when it rains, but I’ll let them figure that out too.