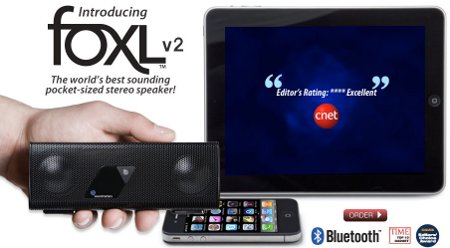 Remember back in the day when video games came with nothing but beeps and boops? The advent of advanced audio quality in video games certainly brought the immersion level to a totally different experience. Fast forward to today, and you will get decent audio and video playback on most devices, but the built-in speakers on your iPhone, iPod, iPad or other portable media player and tablet for that matter probably won’t be able to quite rock the house down.

What can you do? Why, hook it up to an external speaker, of course. Some might want to do it the wired way, but others prefer the wireless lifestyle, which is where the Soundmatters foxL v2 Bluetooth stereo speaker comes in handy. Read all about it in the extended post.

This device is touted to be the perfect iPad travel companion, where it is said to deliver audio quality that even audio purists will love, now how about that? There is a range of special sound features including foxL’s patented “Twoofers,” “BassBattery,” in addition to other technologies which deliver a smoother, deeper bass and an “open & airy” listening experience.

Targeting the iPad (and its successor, of course) especially, the Soundmatters foxL v2 Bluetooth stereo speaker’s “DomeForward” driver alignment and high-transparency acoustic grill will offer you audio quality that you most probably would not have expected from something so small. Just make sure your device is well juiced up and has Bluetooth connectivity in order to maximize the foxL v2′s capability.

The Soundmatters foxL v2 Bluetooth stereo speaker has a battery life of up to 8 hours, and while it is charging, it can also play back whatever media you feed it over the air. It isn’t going to come cheap at $199 though, where each purchase will come with a USB computer charging cable, stereo 3.5mm audio cable, wrist strap, travel pouch, anti-slip mat, and manual. For those who are still stuck in the previous century and prefer a wired connection, there is a wired version which is cheaper at $169.