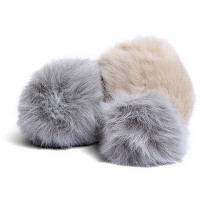 Are you a full fledged Trekkie at heart, and want to own all the merchandise possible on your meager wages? The Star Trek Interactive Tribbles might just be the ticket for you this season, as these adorable furry beasties from the final frontier will cost anywhere from $14.99 to $19.99.

Just some background information on Tribbles for those who do not follow the sci-fi series – an enterprising trader named Cyrano Jones in the 23rd century procured an interesting and adorable little creature, where they helped people (at least most humanoids) feel calmer, and were known as tribbles.

These tribbles, however, outdo rabbits when it comes to procreation, and proved to be quite a challenge to contain since they multiply at an incredible pace. We’re talking about filling up a whole cargo hold in just three days! Good to know the one you purchased is “genetically altered” (some say manufactured) to be sterile, and you need not rush to the nearest Ikea store to buy new wardrobes and store these away.

Coming in 12″ and 6″ sizes, they are powered by AA and AAA batteries respectively, making Tribble sounds when jostled. To turn off their sound making ability, just flip a switch and you’re good to go.