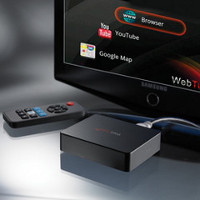 We know that Sony has decided to revolutionize the way TV works this year at CES by integrating even more of the Internet inside, but what happens when you are still rocking to an old school TV and decide to go against the grain by not upgrading your TV once every couple of years? That’s what the Television To Internet Converter is for then – this nifty little device is capable of turning your television into an Internet browser. Basically, it will require a fairly recent TV that has an HDMI port so that it can hook into there, using the included cable to communicate with a wired or wireless home Internet connection. The television’s screen will show off a proprietary web browser that relies on a virtual keyboard that is controlled from the included remote. Apart from that, it will show off various information such as the time, weather, and calendar, while sporting bookmarks for popular websites including YouTube and Google Maps. No full HD here as it maxes out at 720p resolution. You can bring home the Television To Internet Converter for grandpa at $199.95 each.