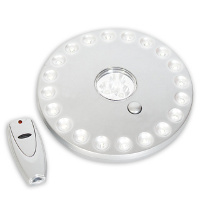 Since it is summer in some parts of the world, what better way than to spend your summer break than with your close ones in the great outdoors? The annual pilgrimage that many people take often ends up in this activity known as “camping”, and pitching a tent is all part of the fun. Well, going at it solo is one thing, but if you head for a popular campsite, it can get quite tough to remember just where you set up your little home away from home, since there are dozens of other domes all around. A late night trip to the toilet might just leave you with the same sinking feeling once you’re done just like when you “lost” your own car in a car park.

But with the £19.99 Tentfinder Light, this need not happen ever again – it comprises of a light that you can hook inside your tent, while a transponder of sorts with a button will illuminate the light’s three center LEDs with a single push. Pressing it the second time will illuminate just the outer ring of twenty LEDs, while a third push will get the entire lot going.

Since it has a 50 meter working range, it makes perfect sense that you’re nearby your tent before it can work. As it relies on low power-consumption LEDs instead of conventional bulbs, you won’t need to replace them, ever, and the batteries will be able to go the distance as well, giving up to 5 hours of light with all 23 LEDs turned on. That ought to give you ample time to look for the right tent, no?