The 3D Hero System – Because Two Cameras are Better AS One 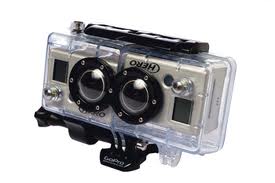 The 3D HERO System is a modular casing design that lets customers combine two 1080p HD HERO cameras to form a single, really cool, 1080p 3D camera… and the world’s smallest and least expensive one at that. Waterproof to 180 feet, the 3D HERO System can be worn on the body, mounted on gear and vehicles, and used as a handheld camera.  A dual-camera, polycarbonate, waterproof housing holds the two cameras together and something called a synchronization cable plugs into the back of each camera, enabling them to function as a single camera and a single shutter button controls both cameras.

“The 3D HERO System is exciting for a lot of reasons, one of them being that it’s not just a 3D camera. It’s really several cameras in one, depending on how the consumer wants to use it,” says Nicholas Woodman, GoPro’s founder and CEO. “That you can take two GoPro cameras that you would normally use independently and combined them to form a new type of camera, a 3D camera…that’s extremely cool. GoPro is excited to be the first company to build a camera this versatile.”

“In addition to being a top selling consumer camera, the HD HERO camera is used by more professional production crews in the broadcast and film industry than any other camera in its class,” adds Woodman. “We expect the 3D HERO System to further establish the HD HERO as one of the most versatile cameras in the world.”

The 3D HERO System housing is only 5 inches in length and 2.5 inches high and sells for around $99.00 bucks, but GoPro’s 1080p HD HERO cameras are NOT included with the 3D HERO System, they are sold separately, starting at around $259.99 per camera at GoPro retailers everywhere.