The Only Inflatable Dog Shower 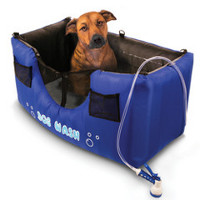 Dogs aren’t self-cleaning like cats, although they tend to lick at their wounds until the sore starts to fester – so make sure your four legged buddy remains nice and clean at all times by sending Fido to a bath, or doing it yourself. Unfortunately for those of us living in apartments, it isn’t so conducive to bath a dog in the apartment itself, never mind if you have a large breed like a labrador. What can you do then?

How about The Only Inflatable Dog Shower? This is touted to be the only dog shower of its kind that will inflates in just five minutes, making it a snap to set up, where it can also folds to a mere 24″ x 14″ for unobtrusive storage once you’re done. The unit itself comes with a handheld showerhead which will emits water at 7 different levels, ranging from a gentle, soothing mist to a vigorous stream which is capable of penetrating even the thickest coats so that pet hair can be removed in addition to dead skin cells.

The showerhead sports a 52″-long hose that lets you wash a dog’s paws, underbody, and other hard-to-reach areas in a jiffy, while 32 sprayers along the inside of the shower will deliver additional cleaning. With 21″-high walls, it will keep the water inside the shower while letting you access Fido without any obstruction. Made out of puncture resistant PVC and nylon, each $119.95 purchase will come with an electric air pump.