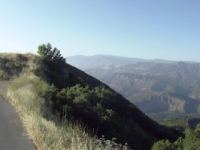 The YUBE is an augmented reality application for stationary exercise, you’ve seen it before, someone pedaling away on a stationary bike and watching the world seemingly pass by on a TV screen. It uses an iPhone or iPod Touch to synchronize the user’s body motion to travel through an actual video, so you can travel the world without ever leaving the gym.

The YUBE plays video (scenic travel or even competitive racing) to the speed of your actual exercise.  The iPhone or iPod Touch is attached to your arm (for walking or running) or leg (for biking) and then the application senses your body speed and uses that to control the speed of the video.  The faster you go the faster you go through the video. Imagine yourself tearing through the streets of Paris or along the scenic shorelines of Santa Barbara.

For me I think it would be better if someone were chasing me, with weapons, or better still if we could have virtual exercise instead, you know, where I could repose on the couch and burn up calories like a marathon runner, I’d even allow a little sweating as long as I didn’t have to get up, or put down my Doritos, but alas, this is the best they can do for now.

The Yube has been around for a while but it needed to be connected to your TV in order to display your exercise video, now with AirPlay and Apple TV,  you can be anywhere in the room and beam your video right to the TV without cords or wires.

Yube offers a full and a lite version, $4.99 and $1.99 respectively, and both are available at www.iTunes.com