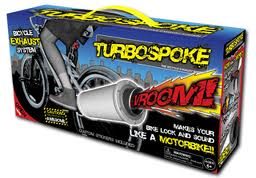 So here we go again, something to add to my list of reasons I want to be a kid again. I remember my first bike, a purple and white Schwinn with the streamers on the handlebars and a bell. Eventually I needed more, so my dad added playing cards by clothes pinning them to the spokes, I waited for the sound of raw power. Okay, so it wasn’t quite what I had hoped for…

Meet Turbospoke, the bicycle “exhaust” system that makes your bike look and sound like a motorcycle. Turbospoke is a cool new bicycle accessory that transforms any bike, except for maybe a purple Schwinn with streamers, into a super cool street machine. Using only the power of your bike’s pedals, Turbospoke produces pretty nifty engine sounds from chopper to dirt bike, and then amplifies them for a realistic rider experience.

While Turbospoke certainly wasn’t attracting the attention of the police, it sure was head and shoulders above the card in the spokes trick, it comes with three different motor sounds to choose from and it’s definitely something that you don’t see on every kid’s bike. Check out the video HERE.