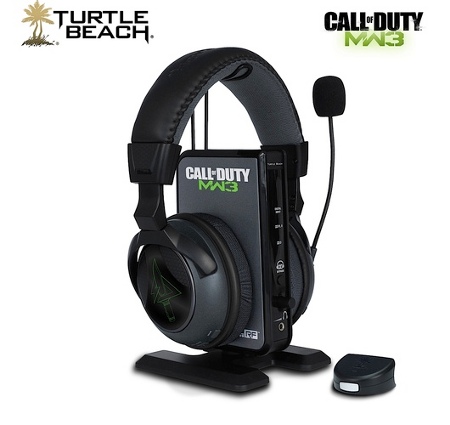 Are you an avid FPS gamer? For those who are purists, you won’t touch anything that isn’t on a PC as the keyboard and mouse combo does seem to be the best to play with to date, but console gaming has also taken off in a big way, where the FPS genre has also made quite a splash. This paves the way for peripherals to be introduced into this niche market, and Turtle Beach wants to be there to take advantage of the situation with their latest efforts resulting in the Limited Edition Call of Duty: Modern Warfare 3 Co-branded Gaming Headsets that will see action on not only the PC but for the Xbox 360 and PlayStation 3.

This is a result of their partnership with Activision, where the new range of exclusively licensed, limited edition Call of Duty: Modern Warfare 3 Ear Force headsets have been specially optimized to deliver enhanced experiences. Of course, you can always play other games with this pair of headphones, but always bear in mind just which game it was released in conjunction with, and you might just help boost the bottomline for Activision this quarter.

These new premium headsets will also be special in its own right thanks to unique sets of audio presets that were specially configured by the audio teams at developers Infinity Ward and Sledgehammer Games so that you can enjoy the best audio quality possible in the cinematic world of Modern Warfare 3. Each purchase will feature bonus content as well as pocket friendly price tags so that it will be extremely inclusive. Below are some of the models available alongside the pricing at the end for your further study before the missus gives her approval.