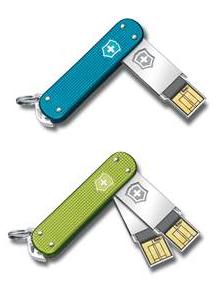 Victorinox has long been a staple name where Swiss Army Knives are concerned, and it is nice to see the company keep up with the times with their latest range of devices for the ever hungry mass market – we’re talking about the Slim, Slim Duo and Secure SSD USB devices. For those of you who managed to attend this year’s CES and made up part of the 140,000 entourage there, you might have chanced upon Victorinox’s booth. Well, good news if you didn’t manage to simply because there wasn’t enough time to cover the showfloor – at least we are able to bring you official word on a trio of new products – the Victorinox Slim, Victorinox Slim Duo and the Victorinox Secure SSD.

The new Slim range will comprise of an advanced USB flash drive that will cater to the more utilitarian man, as well as those who are frequent travelers since flight friendly versions are also available. Just like how you love to be unique yourself, these will come in a range of its very own designs, colors and slim dimensions alongside data storage of up to 128GB. For those who are wondering where can they lay their eyes upon the world’s smallest 256GB SSD (solid state drive), look no further as Victorinox’s Secure SSD (as pictured above) is where the money’s at, delivering three times faster read speed and more than double write speed when compared with standard high speed USB Flash devices.

As for the Victorinox Slim and Victorinox Slim Duo, both of these additions will combine portable data storage in the form of a USB device alongside a standard Victorinox pocket knife that will boast various functions such as blades, nail file and scissors – of course, as mentioned earlier, you can always look for the flight friendly version if you’re part of the globetrotter clique. Both of these puppies are waterproof and shock resistant, so don’t fret whenever you drop it by accident due to your boss walking up on you while you were surfing some NSFW sites. Since life is not in black and white, you can always choose from different colors such as red, blue, orange, pink, green and silver.