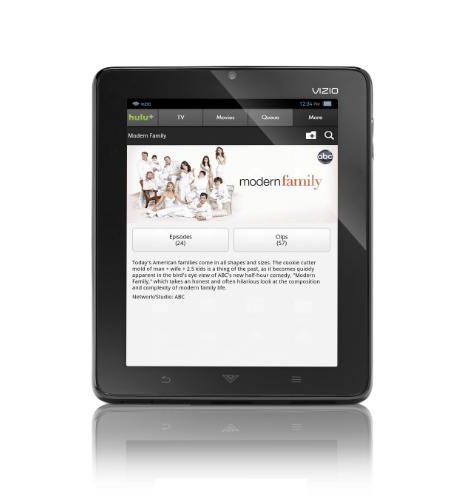 Portable entertainment – that is the name of the game for many hardware manufacturers and software developers these days. Once you have fantastic hardware alongside a stable software platform to deliver digital media to a portable device that can be carried around anywhere, and you’ve got yourself a winner – if the price is also sensitive to what folks are comfortable with, of course.

Well, Vizio, the company that tends to make great TVs without breaking the bank is back with their Vizio 8″ tablet that is said to support the Hulu Plus service, where you can download the necessary software required from Android Market for free to get your portable entertainment action going on. Anyone who wants to pick up a tablet just to keep themselves entertained while they’re on-the-go might want to consider what Vizio offers with their sub-$300 tablet now.

Let us talk about the app itself – this is one app that has certainly generated its fair share of buzz prior to its release, where it will deliver a massive library of TV and film content from more than hundreds of providers and independent creators, where subscribers who rock to the Vizio tablet will be able to enjoy such a rich cache of entertainment for just $7.99 each month.

The Hulu Plus subscription service is said to complement Vizio’s mission of delivering high-quality technology and “Entertainment Freedom™” to consumers without causing too much strain on your monthly budget. Think about it – if you purchase a single DVD each month, why not spend that money on a monthly subscription instead? Each subscription will let you gain instant access to current and past seasons of shows like 30 Rock, Modern Family, The X-Files, Arrested Development and Family Guy.

Heck, the Vizio table is Wi-Fi capable, letting you surf the Net as well whenever you aren’t busy watching your favorite movies from the past or recent blockbusters, and to make sure it can rock your world, a trio of speakers has been thrown in to enhance audio whether you place the Vizio tablet in landscape or portrait modes. A built-in universal remote app for home theater control and a HDMI port rounds off the list of prominent features. Any takers?