Vizio does tablets with 8″ model 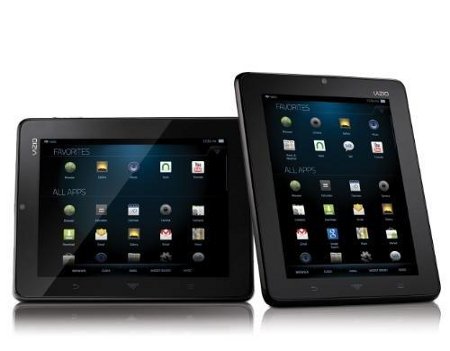 Vizio, the company that is famous for its range of budget-friendly HDTVs, has decided to dip their fingers in something very, very different – we are talking about a tablet here. Yes sir, the number 1 LCD HDTV company in the US has just announced their latest Vizio 8″ tablet (there is no proper name to it, can you believe that?) which will retail for a mere $299 a pop, making it far cheaper than the other tablets in the market.

Of course, it goes without saying that tablets from Apple, Motorola and other manufacturers which cost far more than Vizio’s model does have value in the extra dollars you fork out – those come with superior hardware, but just what can you expect from a sub-$300 tablet? Find out after the jump.

This particular tablet will sport Vizio Internet Apps Plus that merges the latest technologies with a unified, easy-to-use and fun user interface which will work in tandem with upcoming Vizio HDTVs, Blu-ray players and other devices. Not only that, you will be able to use this new tablet to control just about every element of a user’s home theater via a universal remote app – so you need not consider forking out another couple hundred dollars for a high-tech universal remote control for the living room.

Other hardware specifications include Wi-Fi connectivity to make sure you can take advantage of Wi-Fi hotspots where available, although the lack of 3G support means you cannot remain connected anytime, anywhere – on the bright side, at least that helps you save battery life, and you need not worry about supporting another monthly data plan on your budget which is already bursting at its seams. There is also a built-in HDMI port with HDCP support for content protected HD playback on a big screen TV. Seems to be the perfect model if you want to introduce someone to the world of tablets.